Our Bodies, His Temple (except fight nights)

This past weekend I found my self dancing and fist pumping my way around the living room for all my neighbors to see. What brought me to this ridiculous display was quite simply the beating of a cocky man. It was UFC 196 – McGregor vs Diaz. For those unfamiliar, U.F.C. stands for Ultimate Fighting Championship which is the premier Mixed Martial Arts promoter in America. It consists of 2 men (and now woman) entering an octagon cage and fighting a handful of timed rounds or until someone gets knocked out or submits to the other.

McGregor, well-known for his way with words and incredibly tactful fighting style, spent the previous two weeks destroying Diaz in a battle of words. Each pre-fight interview leading up to this night was won by McGregor waxing poetic insults as masterfully as a practiced seamstress weaving a tapestry. Diaz was never known for his lofty vocabulary, but this verbal lashing left him saying less intelligent sentences than usual muttering only simple profanity that lacked any conviction. Typically I’d pay to watch one of the two Diaz brothers get beat to a pulp just because of my great disdain for their level of arrogance, but I actually felt compassion for him. Perhaps he had no worthy comebacks because he had gotten punched in the head 15,000 times too many or perhaps he actually lacked gusto because he was intimated. Either way, oddly, I wanted to see McGregor get pounded because Diaz was the underdog.

After taking a beating the first round, Diaz’ face looked like a swollen, bloodied punching bag. McGregor laughed and taunted as the utter dismantling was soon sure to come but then Diaz caught him with a straight left that made McGregor shaky. Out of desperation McGregor dove in for a take down that was countered. Diaz, a black belt in Brazilian Jujitsu, quickly had his back and began to choke McGregor out with a rear-naked choke hold. McGregor tapped out so as not to lose consciousness and that’s all she wrote. Fans were stunned by this David and Goliath moment and I was just giddy as a school girl.

There’s just something about two men entering a cage wearing four-ounce gloves while knowing that only one might be standing by the end that fuels my inner carnal man. Like most people, competition is entertaining. There is a winner and a loser (sorry P.C. world) and it’s just fun to get behind a side. Now I know I don’t speak for the masses, but for me there is a strong correlation between aggression and overall appeal when it comes to sports I like to watch. Much like a meal without meat, a ‘sport’ without physical contact is a sham. Despite this, over the past couple years a new sensitivity has crept into my heart which is threatening these reverent events. I find myself cringing at some of these blows and unable to watch replays that show massive hits in slow motion. There is now a dichotomy between my desire for savagery and the frailty of human life that is encroaching on my enjoyment.

I can attest that this bridge between these worlds stems from my own body’s limitations that seem to grow every year that melts by. Due to back injury, getting out of bed in the morning starts with a five-minute stretching routine. Many basic activities are weighted with an invisible pros and cons list with an end goal of minimizing pain. To watch an unsuspecting wide receiver get bent in half by a safety makes me turn away anymore. Seeing a post fight interview of Jon ‘Bones’ Jones with a massively broken toe makes me squeamish. I begin to question if one should put himself in this danger and whether this is worthy of entertainment.

Darn you Father Time…what have you done to me?

On top of my own feelings, science has fueled many debates as to the safety issues that surround many of my beloved sports. American Football has been hit the hardest and it’s no surprise as it far exceeds the revenue and popularity of any other sport in the US. Chronic traumatic encephalopathy, or CTE as we hear it, has been heavily researched as of late.

CTE is a degenerative brain disease brought on by significant and/or repeated blows to the head. The disease actually causes brain atrophy that brings on a host of symptoms from disorientation and headaches at one end of the spectrum to erratic behavior and dementia at the other. A recent study published by Frontline revealed that 87 out of 91 deceased NFL players that were tested for the disease had it. Grant it, many of the brains tested were donated because of suspicion of this disease. Although not as heavily covered, MMA and other fighting sports have the same issues to contend with.

When cells continually get destroyed and rebuilt mutations in new cells can occur. Think of Cancer. The body has mechanisms in place to try to destroy these rogue cells but the odds don’t always win. Much like this, head trauma kicks off a chain reaction where the body attempts to kill off damaged cells to prevent mutation. Within hours of the trauma the immune system in the brain is activated which incites neuroinflammation thus resulting in a complex chain reaction that ultimately results in the formation of amyloid beta plaques and tau tangles. An excessive amount of these plaques and tangles are what scientists routinely see in Alzheimer’s patience. At this point the brains inability to clear the waste results in the breakdown of function and ultimately brain atrophy begins.

So what options am I left with? Can I have my cake and eat it too? This juxtaposition is becoming more like Jekyll and Hyde with every season that passes giving way to more scientific proof that inevitably betrays my desire to release the beast within!

It hits home when I think about my young child and whether I would want her to take part in such violent sports. As a loving father concerned for her safety I’d prefer she substitutes those four-ounce gloves for a myriad of other things. Heck, I’d rather see pom poms and that’s saying a lot.

It’s this thought that makes me reflect on my Heavenly Father. He has a love for us that is unmatched by any earthly father yet He worries for nothing. But would He care if someone decided to use their talents in a way that put one’s body, one’s temple, unnecessarily in danger or can we toss that into the basket of religious ‘freedoms’ right beside the weekly bottle of vino?

To me, motive is a key. Are we out for something self-seeking like fame, money or pride? Although much less prestigious I can fall prey to that in my weekly journey in the land of nerdism I find myself Monday through Friday. God grants us all unique gifts and abilities so why can’t having pin point accuracy via round house kicks to the head be one of them? Whether we choose to enter the octagon of battle or a three-sided cubicle we need to be searching our heart and testing it’s desires against the will of the Spirit.

As a Christian I find it refreshing to hear the Russell Wilsons and the Tim Tebows of the world being able to openly speak and give praise to the God that gave them the abilities to do what they do. I know that same sentiment isn’t shared by the majority of the public as president of the U.F.C., Dana White, so clearly expressed after a post fight interview with winner Yoel Romero.

“You just won the biggest fight of your career, America doesn’t want to hear your thoughts on Jesus. Keep that stuff at home; religion, politics, all that stuff. When you’re out there fighting and you’re being interviewed, they want to hear about the fight,”
“It’s awesome you love Jesus; love Jesus all you want. You just don’t have to do it publicly.” MMA Fighting

I’m sure glad that the Apostle Paul, the grandfather of Tebowing, didn’t decide to leave ‘all that stuff’ at home. Nah, he brought that Jesus stuff out of the home and to the uttermost parts so a heathen like me could quit boxing as one beating the air. 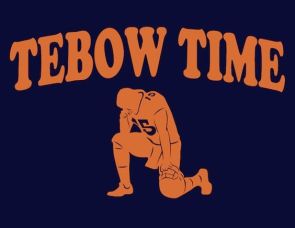 Every day our bodies and our world wake to continued decay that can be traced back to that fateful day in the Garden of Eden where man’s choice was aligned with motive and failed horribly. I praise God for the freedom, grace and redemptive power brought forth through the sin offering of Christ. May our motives be pure, our words bold and our eyes seeking His will.

Keep steady my steps according to your promise,
and let no iniquity get dominion over me.

Redeem me from man’s oppression,
that I may keep your precepts.

Make your face shine upon your servant,
and teach me your statutes.