While car pooling home one evening, my buddy asked me why I liked Breaking Bad. It’s a fair question. I probably bring up the show at least once a week in conversation, and while it’s received massive accolades, if you haven’t seen it, you probably don’t naturally “get it”. I was by no means obsessed with the show, though maybe overly intrigued by it.

I have this meta-vault of shows which I have watched every episode. I’m not a massive TV guy, so this list, over the past 20 years, is on the short side: Friends, Seinfeld, The Office, Community, and Mad Men (to be). House M.D. also gets an honorable mention (skipped a season or two once the original gang broke up, but then got back in later). Breaking Bad is the latest to be inducted.

Here are three brief, interconnected reasons why I stuck with the show.

As a final tribute to Breaking Bad, I compiled a video tribute with some specific focuses. It all came together when I heard “My Father’s Children” by the most excellent Son Lux. This track is from the Transgressive North compilation entitled “Boats” which benefits destitute children in South East India (so go buy the whole album). After about the third or forth time listening to the redemptive glory of the song, a different avenue opened up as Walter White popped in my head (don’t worry, he was wearing more than whitey-not-so-tighties and an apron). A more melancholy sadness (it wasn’t infinite) occurred within me, thinking about what we fathers devote our attention to and what we leave behind (for better or worse). Mad Men is a much better parable on generational sin and the blessing/curse of inheritance, but the whole family dynamic, twisted and sincere, played a huge point of the Breaking Bad narrative.

So I imagined Walt dying, breathing in and out of a visual eulogy, a recollection of the brokenness experienced over the past few years of his life. I gave attention to his kids, whether biological or protege or his pride and joy of meth and money. There is also a focus, of course, on death—Walt’s own mortality and the brutal violence he associated himself with, willingly or not.

Ozymandias was a poem about a “fallen empire and the ego that once ruled it.” It was the title of one of the final episodes of Breaking Bad, a fitting parallel. Check out this link for a great tribute video that uses the poem as its intro.

I met a traveller from an antique land
Who said: “Two vast and trunkless legs of stone
Stand in the desert. Near them, on the sand,
Half sunk, a shattered visage lies, whose frown,
And wrinkled lip, and sneer of cold command,
Tell that its sculptor well those passions read
Which yet survive, stamped on these lifeless things,
The hand that mocked them and the heart that fed:
And on the pedestal these words appear:
‘My name is Ozymandias, king of kings:
Look on my works, ye Mighty, and despair!’
Nothing beside remains. Round the decay
Of that colossal wreck, boundless and bare
The lone and level sands stretch far away.”

Did Walter White rest in peace at the end? Did he really realize the carnage of his pride and turn? Or were cold car prayers and confessions to his Eve just lip service to make sure he retained final control of it all, even his death? 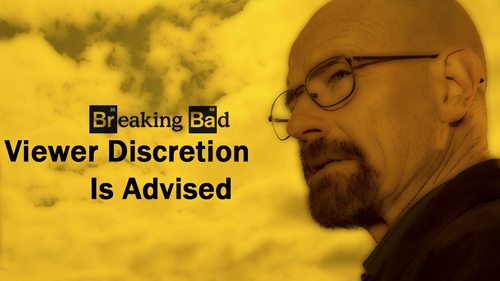 One thought on “Breaking Bad: A Visual Eulogy”