Loving Kids When You Have None

For most of my young adult life, having children wasn’t a priority. Not that I disliked them. It’s just that my adult self didn’t know much about them — except that people kept saying how much work they are, which in my late teens and early 20s, didn’t sound like much fun.

I grew up in a family where other kids were absent. Not having any younger siblings or even older ones close in age (my brother was off to college before I entered elementary school), I was raised in essence as an only child. Work drew my parents far from relatives. The children in my extended family appeared a few times a year at Christmas, family reunions, or other special occasions. Friends my age were accessible all year, but all this meant that as I got older, and my friends grew up with me, the opportunities to connect with little ones were few.

Out of sight, out of mind, I suppose. Instead of dreaming about becoming a mother some day, my heart was set on a career. I was considering a Ph.D. in classic literature.

Several years ago, the first of my friends to have a baby welcomed a little girl into the world. I held her in my arms when she was only a few days old — tiny, fragile, and utterly dependent upon my friend and her husband for her survival. I remember, as I cradled her, being more than curious about this creature — in awe even. I was amused when her lips latched onto my shirt, and she began sucking.

Around the same time, I was invited by someone at my church to volunteer in the children’s ministry. God eased me into this foreign territory, a place where children were abundant. There was and still is a surplus of children at my church. And God has led me into other children-focused ministries. My job in all of these, I thought, was to teach the kids something about Jesus. Instead, they’ve taught me. They’ve taught me that they’re not as interested in the carefully crafted lesson I have for them as they are in telling me what sports they play, what they did with their families while on vacation, that their grandparent died, or that a best friend is moving away. They’ve taught me what they want more than anything else is to know that we adults care about them and that they are loved. They want to be known for who they are and loved as they are. And I’ve learned sometimes the best way to do that is to just listen. It strikes me now that God loves His children (of all ages) by listening. He desires that we take everything to Him (Philippians 4:6).

Quite unexpectedly, my heart has changed. I look forward to having children, and adoption is a recurring thought. Loving kids is now one of my greatest joys. I’ve actually started to dream about motherhood. Whether that day comes or not isn’t really the point though. In spending time caring for children, I’ve grown. The kids have grown too. We’re learning from each other. And I’m so grateful because they have blessed me abundantly. 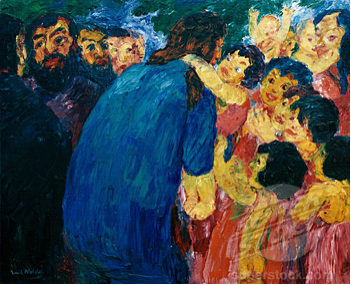 Christ and the Children by Emil Nolde (1867-1956). From the German Museum of Modern Art New York City.

If you’ve never had children of your own, whether by choice or circumstance, I encourage you to seek out children in your church or community and spend some time with them. Maybe you’ll be able to love them in a really cool and unique way. Maybe you’ll make a munchkin-sized friend who likes the same adventure-fantasy trilogy as you do.

Maybe it really does take a village.

Behold, children are a heritage from the LORD, the fruit of the womb a reward. Like arrows in the hand of a warrior are the children of one’s youth. Blessed is the man who fills his quiver with them! He shall not be put to shame when he speaks with his enemies in the gate.

3 thoughts on “Loving Kids When You Have None”