I’m a soothsayer, stargazer, fortune-teller and I have a prophecy for you. Yes you reading this post right now. You, my friend… will… die. If you believe anything different than this, you are living an illusion.

The extent of my magical powers ends there. I don’t know when or where or how, just simply that you will indeed die. But let’s pretend for a moment that you die of heart failure, which, playing by the odds, is the best bet since it’s the leading cause of death.

As your heart stops, an eerie silence falls deaf on you. The internal rhythm and pace of the beating in your chest, that was more than often unnoticed, ceases, no longer moving life through your veins. Without blood, the lungs suffocate in on themselves and oxygen doesn’t get to the brain. After 3 minutes brain cells start disappearing. Gravity kicks in and your lower body turns purple as the blood settles; your upper half, pale, like it just saw a ghost – perhaps it’s own. In 3 hours, energy molecules dissipate, calcium leaks into your muscles and they stiffen before they start to decompose a day later. You are now cool to the touch and to the core. Since the body can’t fight off bacteria any longer, some of your organs start digesting themselves in the continued process of decomposition.

Of course, this is the all natural approach that doesn’t have other externals affecting the process or initiation of death. Many of us have experienced the death of our loved ones from the sudden and violent standpoint. I’ve had three traumatic deaths in my life. First, in my junior year of high school, my girlfriend was killed in a car accident. Another car t-boned the van she was in, causing it to hit a tension wire which sent the vehicle whirling around, the force sucking her seat-belted body out the back window. Second, my Grandma, after a ladies lunch date, was in a car that pulled out in front of another car. The other two with her were killed instantly. A waitress who heard the crash ran out and stayed with my mama the last remaining moments of her life. All she kept saying was, “Tell my son,” my father, “I love him.” Third, in 2006 my mother had a brain aneurysm explode on a random afternoon. She was unconscious for a couple days. Doctors couldn’t operate because of complication with pneumonia. Then the time bomb went off again and death took the woman that birthed me into life.

You return man to dust and say, “Return, O children of man!” For a thousand years in your sight are but as yesterday when it is past, or as a watch in the night.

You sweep them away as with a flood; they are like a dream, like grass that is renewed in the morning: in the morning it flourishes and is renewed; in the evening it fades and withers.

For we are brought to an end by your anger; by your wrath we are dismayed. You have set our iniquities before you, our secret sins in the light of your presence. For all our days pass away under your wrath; we bring our years to an end like a sigh.

The years of our life are seventy, or even by reason of strength eighty; yet their span is but toil and trouble; they are soon gone, and we fly away.

Who considers the power of your anger, and your wrath according to the fear of you? So teach us to number our days that we may get a heart of wisdom.

We have many misconceptions about the gravity of death, about the importance of our bodies, about heaven, and about how life and afterlife are connected. In the spring, I hope to post about resurrection and address some of these items, looking to spark thoughts toward biblical-theology rather than popular notion. But for today, I want to briefly explore our practical mindsets in dealing with the death of others, whether it be friends and family or local and global tragedy that intersects our lives in some way.

I say the following with a bit of hesitation. I don’t want this to come off as a prescription. Dealing with death is so experiential and personal, it opens up spiritual, emotional, and physiological doors in you that are not able to be accessed at other times. Rather than instructional, my writing of the items below is for pastoral purposes in wanting to provide care of your thought process for future periods of grief. These postures of heart/mind/spirit should be processed before grief comes, as something to tuck away which can be brought into the experience because it’s already part of your makeup. God is always working, but, trying to set up some paradigm of grief in the very midst of it, will probably be fruitless and little more than a distraction. When death comes, we should mourn. This might seem a bit simplistic as though I’m stating the obvious; after all, isn’t mourning the default mode of operation when interacting with death and grief? It’s been my experience that it’s not. We tend to turn to two other companions instead: Misery and Medication.

The one thing that Misery does well is bring a sense of hopelessness to the situation. She asks great existential questions, but she puts blinders on you and makes you stare into a void–a black hole. Though she is a companion in traveling through grief, she makes you feel completely alone; all is shadow around. She wraps you in fear, she silences your tongue to speak to anybody in the surrounding dark, she turns your countenance into that of the grave. Misery pushes despair into your veins like an embalming agent.

Medication is a sibling of Misery, rooted in the same family tree, yet opposite. Where Misery would have you trapped, Medication has booked you on a flight to Tahiti. Where Misery is an atheist whispering in your ear, Medication is a superficial chaplain that will preach to you about wishful-thinking that has no grounding whatsoever except that it makes you feel better. Misery empties you, Medication fills you.

Medication sticks with you and his art is that of distraction, making you think death is no big deal. He deals in both subtle and obvious manners, pulling your attention to anything but the reality at hand. He is your butler, a servant right by your side at all times ready to give you another drink or another book to read or remind you of another appointment that must be made. Medication stimulates and anesthetizes you at the same time, keeping your eyes open, but unable to feel anything.

Misery and Medication are jealous beings and will fight for your attention when death is around in order to keep you from being where you need to be, in a place of mourning, and with whom you need to be, God. 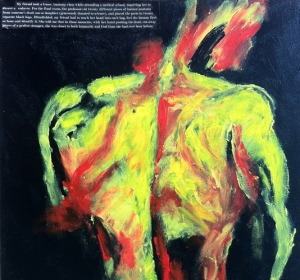 “My friend took a Gross Anatomy class while attending medical school, requiring her to dissect a cadaver. For the final exam, the professor cut twenty different pieces of human anatomy from someone’s dead son or daughter (generously donated to Science), and placed the parts in twenty separate black bags. Blindfolded, my friend had to reach her hands into each bag, feel the human flesh or bone and identify it. She told me that in those moments, with her hands probing the dead, cut-away pieces of a perfect stranger, she was closer to both humanity and God than she had ever been before.” [John 20:27-29 || Words by Jay McCumber || Visual Art by Rachael Viola Bordon]

As a redemptionist, I believe God can and does work through all things, even able to bring good out of twisted times. God’s still small voice reminds us when in despair that even if we aren’t able to pull ourselves out from the pit, He is. His still small voice reminds us that He wants to be with us, that even in the midst of our pain, we can turn to Him and find His presence.

When we walk through grief with God we actually feel the death more because His broad shoulders support us as the weight of emotion presses down. He may provide answers you don’t want to hear or no answers at all, but He is always there in the inquiry, even suggesting thoughts to yell out at Him as we shake our fists. He un-cages our anger and the turbulence of grief does not cease in the waves of mourning. The key though is that we are not left alone, whether it be at the crest or the trough.

God knows what it’s like to lose someone to death. He experienced it first before the foundations of the world and to a depth that no human could ever comprehend. To dismiss God’s personal loss due to His Son’s resurrection would be to count Christ’s death as superficial, cheap, and pointless. Even He has experienced an infinite amount of tragedy, He never minimizes the death of humanity, not even taking pleasure in the death of the wicked, for we are all His creation (no matter how fallen) if not also (by grace) His children.

Ultimately, when we enter into true mourning, we are blessed, for the God of all comfort takes care of us. Comfort is a lot different than our notions of soft pillows, aspirin, soul therapy, a microwavable meal you put in and 3 minutes later enjoy. It is akin to a child war-torn and battered, clinging to a parent and at rest in the cleft of their arms, stilled by the sound beating from their parent’s chest even though fear echoing explosions are all around.

3 thoughts on “Dealing With Death [justin]”