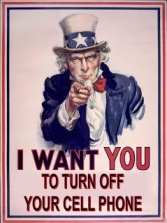 “Tell me what you’ve done and what it is you’re trying to accomplish,” he said very, very loudly.

That is one statement among very, very many that are being said at very, very high volume.  Verily, verily, I say to you: this guy is driving me nuts.  And so does everyone else like him.

To my right is a cute family of four, late twenties, two kids under age five, trying to enjoy an idyllic piece of Americana: the family meal.  To my left is an older couple, silently praying their dentures don’t fall out as they engage one another and their sticky-filled danishes.  I think they’re on a date; very cute together. And yes, I actually heard the guy say, “I hope our dentures can handle this!”  In the other comfortable chair in front of the fireplace is a middle-aged woman perusing Real.Simple.  Against the wall I’m facing are three booths, a good fifteen feet away.  In the left-most booth are two coworkers on lunch break; in the booth on the right are two friends enjoying coffee; and sandwiched between them is a guy talking so loudly on his cellphone that everyone can quite literally hear every word he is saying as though he were personally sitting at their table.

Every person in this restaurant knows exactly what is happening at Five Below.  Some assistant manager couldn’t find and/or complete the payroll form.  They had been processing the week’s tally, but only had the spreadsheet completed, not the appropriate payroll form.  Mr Manager can’t figure out why in the world they can’t figure out so simple a location of said form.  Aha!  Assistant Manager found it!  But alas, Assistant Manager is confused by this form of forms, and Mr Manager cannot for the life of him understand why this is so difficult.

As I pick up my phone to text my wife, the four-year old next to me glares at me as if to say, “Don’t even think about talking on that thing loudly in this public place.”  I smile at him, reassuring my good intentions to protect his loving meal with his family.  He belches and then grins.

At this point, the old man — dentures still in — turns round and glares at him as only a southeastern Pennsylvanian can.  All the ice in the store begins to melt.

I was staring/glaring at him just then, across the large space between us.  He looked at me as if to say, “What are you staring at?”  I wanted to belch at him and grin; but I didn’t, I just glared.

As if this wasn’t enough, a few weeks ago, I was in another coffeeshop in another town and there was a woman skyping her business conference calls in this place!  Skyping!  She had one of those ridiculously huge Dell PC laptops with speakers that could be used for a Metallica concert cranked like all the way up, loud enough for everyone to hear everything that was going on in her company and corporate conversations.  There were four of us in a pretty tight four table grouping.  We were all trying to do quiet things.  The woman at the table across from me was studying a medical textbook; the woman at the table next to me was on her computer with headphones on; I was journaling — also with headphones on — blaring Arcade Fire into my head, trying to drown the skyper out, and it wasn’t working.

First, she skyped with her personal mentor.  It was pretty personal; quite honestly, it was a bit much.  I took notes on her mentor’s coaching strategies and her personal life for the purpose of blogging about it at some point because after hearing this skype conversation I am so much more convinced of the profound impact that presence-based, redemptive mentoring can have as opposed to psycho-therapeutic, positivity coaching.  So when I start a post with, “So I’ve been thinking about mentoring strategies…” you’ll know where it came from.

Anyway…after that skype session, she then skyped with her reports, four of them, all at the same time.  One big public group skype session.  One dude sounded like an elephant with a cold, and one of her female employees reminded me of Renee Zellwegger.  I don’t remember the other two.  Anyway, apparently things were pretty status quo at the company and she wasn’t happy about that.  They needed passion!  They needed focus!  Sure, they were hitting their numbers, but what about the vision of the company?  She wanted things to pick up and if things didn’t pick up, she was going to need those T-111 reports twice a week instead of once a week, and nobody wants that, right?

Actually, I don’t remember the specific title of the report.  T-111 is a type of paintable exterior plywood, but it sounded something like that…very official.

After hearing from her reports, she had a skype conversation with her boss.  Her boss was a really nice guy, sounded like a cool dude to work for.  He really liked the painting on the wall he could see behind her head, and had her lift up her computer so he could see it better and told her to be quiet while he contemplated it for a good forty-five seconds and she sat there holding the computer up in the air.  Their meeting lasted about twenty minutes or so, and only about two minutes of that were business.  I think that guy and I would be friends.

Anyway…seriously, people…don’t do this kind of crap in public.  If you need to talk on the phone and you’re in a public place, go outside.  If it’s raining or crazy cold out, and you just absolutely must talk on the phone, do it oh so very quietly, and make it as brief as possible, or go to the bathroom or something.  And frankly, I can’t think of one good reason to ever skype in public.  Ever.

Atmosphere matters and people matter.  The people to people conversations and engagement around you are actually there.  Do not digitally intrude on them or the atmosphere/space that a restaurant, coffee shop, bookstore, pub, movie theater or cafe is trying to create.  If it’s quiet enough in there for you to have a good conversation on the phone or to Skype publicly, then it is an environment in which you shouldn’t do either of those things.

Basic human decency, regard and common sense are worth valuing and living out no matter where we are or what we need to get done.

“Do nothing out of selfish ambition or vain conceit.  Rather, in humility value others above yourselves, not looking to your own interests but each of you to the interests of the others.”  — Philippians 2.4,5