Listening to an Ass [phil]

Many people talk to their animals, but with the exception of Alex the parrot, a few sign language using apes, and cartoon characters the animals don’t talk back.  Which leads me to one of my favorite stories of God communicating with people.

There was this guy named Balaam.  He was basically a shaman or self-made priest.  He was known around the land as the guy to go to if you wanted to know what God was saying or if you wanted an effective blessing or curse put on someone.  When the people of Israel were leaving Egypt and trying to find a place to call home, the kingdoms they passed through and whose real estate they were checking out were not real keen on this wandering nation settling in their land and taking over.  A few of them got together an army, but they decided first they should put a curse on the Jews.  So they sent some messengers to Balaam telling him very wealthy and influential people would reward him handsomely if he would curse some people for them.  Balaam indulges in a little negotiation, telling them he can only bless or curse as God instructs him.  So they assure him it is a lot of money.  But it turns out that God really does not take kindly to his people being cursed.  He sends an angel, sword in hand, to deal with Balaam and he stands on the road waiting for him.  Balaam saddles up his donkey and sets off with some servants.  But the donkey sees the angel in the road and runs off into the field with Balaam.  The shaman is very upset about this and yells at and beats on the animal all the way back to the road.  He tries to go forward again as the road passes between two walled vineyards.  The donkey runs off the road again, crushing Balaam’s foot against the wall.  Balaam again beats the animal and gets back on the road. The place where the angel is waiting is very narrow, with walls close in on either side of the road, so once Balaam and his donkey are in front of the angel, there is no place to turn and the donkey just lays down and refusing to move.  At this Balaam is beside himself with rage he begins screaming at the animal and beating it with a stick.  The donkey then begins talking, “What have I done to you that you have beaten me three times?” And Balaam instead of saying, “Wow! A talking donkey!”  simply answers the animal, “You made me look like a fool.  If I had a sword in my hand I’d kill you now.”  To which the donkey gives a very reasoned response, “Am I not your donke 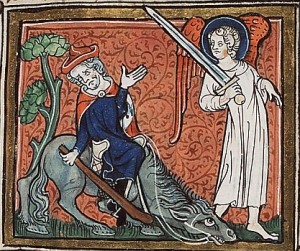 y whom you ride all the time? Have I ever acted like this before?”  “No.” says Balaam.  Then the angel reveals himself, sword in hand, and tells Balaam he is lucky his animal is smarter than him, because the donkey saved his life.  If he had persisted in trying to go down that road to curse the Jews he would have been killed.  The angel tells him he will now go, but he will deliver God’s words.  Balaam is instructed by God to bless the Jews and he does so in the presence of the kings who hired him to curse and then curses those same kings.  (Numbers 22-24.)  This is the only instance I know of in the whole Bible where a normal, regular, physical animal speaks to a person to deliver God’s message.  It is totally out of the normal paradigms for God’s communication with people.  So often we look for God to work or speak in a familiar way.  We have an expectation that God will do or say such and such in such and such a way.  But God is not so constrained.

God once told people not to create idols, even idols representative of Him.  Those graven images could not define or contain God and only served to limit God in the eyes of those who would create or worship the image.  Our self-constructed mental images and theologies can be every bit as much an idol as a statue, trying to box up and limit God- creating an image of Him we can understand, predict, control, be comfortable with, intellectualize, and philosophize.