This post began as a personal reflection on my time working with my kids at the youth center. I was thinking, as I often have, about what might happen after I leave the youth center to pursue other things. Specifically: what will happen to them when I’m gone?

The question honestly scared me. Aside from the fact that I’m just plain going to miss them because I love them, because they mean a lot to me, and because they have impacted me and the way I think (see “Misconceptions about ‘the Youth,’ Pts. 1, 2 & 3” for a full explication of these thoughts), I was also afraid that the work I’d been given to do might all be undone after I’ve left. I worried that, one, whoever works with my kids after me might not see them, invest in them, hope for them, know them, or love them the way that I have and do, and two, that my leaving might seem to them a betrayal and completely undermine the love I’ve communicated to them by being with them from the beginning, by not walking out when things got difficult or when something better came along.

In part, of course, this is pride, claiming, one, that the work God is doing in them is dependent solely and entirely on me, and two, that my absence would be irreparably damaging in a way that only my presence could mend. In my mind I know these things are false, but it’s still hard to get past.

And that’s where I made this realization: we, as humans, think that we are fundamentally unchangeable. We may be modifiable but only on a surface level and, even then, only to a certain degree. 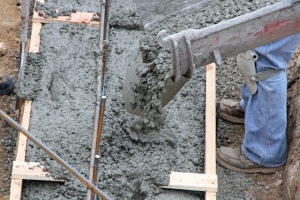 We think that we are set, unalterably predetermined in every way, that we are cast-iron frames, hammered out by God before all things; we are then stuffed full of the powder-mix of our attributes, preferences, and dispensations and then slowly filled to the brim with the water of irreversible life experiences, forming the fast-hardening concrete of what becomes our inevitable selves. The more life that gets poured on, the more we are filled; the longer we wait, the harder and more set we become. Maybe, at best, we can stir that concrete in a certain way early on as the water is poured—while we are still children, before we’ve completely solidified. This, we hope, can affect the outcome of our or loved ones’ identities in a positive way, knowing that nothing can change that core once it has hardened. We stir and jostle each new layer of experience and development, but our core—our earliest foundation—remains the same, permanent, absolute. Nothing that happens to us and no one we encounter can affect us, nor be affected by us, so profoundly that the very notion of who we are, or they are, can be reformed. No real change will come to us or to those we love, for whom we desire real and deep change.

But this is not so.

Where were you when I laid the foundation of the earth?
Tell Me, if you have understanding.
Who determined its measurements—surely you know!
Or who stretched the line upon it?
On what were its bases sunk,
or who laid its cornerstone,
when the morning stars sang together,
and all the sons of God shouted for joy?

Our God changed dust into flesh; He changed water into wine; bitter, undrinkable water He made sweet and refreshing. He turned nothing into everything, void into the universe; dry bones He wrapped in living tissue and summoned warriors. He drew water from a rock and altered the molecular makeup of an ax head so that it would float in a river. He transforms a heart of stone into a heart of flesh; He converts suffering into glory and sin into forgiveness, night into daylight and death into life. He actually makes our old dead selves into a new living creation, literally forming a brand new species from our rotten carcasses. He turns ashes into beauty, mourning into dancing, and funeral attire into clothing of joy. He adopts His enemies and makes them His sons; He betroths Himself to a whore and makes her His bride; Not-My-People, He made My-People; Not-Given-Mercy, He made Given-Mercy. He put on flesh and made Himself man; Old Law became New Law; the Cross became the Empty Tomb; our frail bodies became temples for His Spirit. He transforms glory into greater glory into even greater glory.

God has been crushing, shifting, and remolding the solid concrete of human nature from the beginning, and will continue to do so until after the end of time. God is our only foundation; everything else—as set as its nature may seem—is subject to His reforming, reworking, and revision. I don’t have to worry about what will happen to my kids when I leave the youth center, because my hope is certain not only that I will be conformed to His designs, but that my kids, for whom I yearn to see the actualization of God’s intentions, will be brought to such fruition.

This hope, our hope, is certain because our foundation is certain. God is our hope and our foundation, our rock, our starting place. All of us are potential energy in that God sees us fully as we are meant to be, even when we aren’t yet. Though we now are incomplete, God’s love will perfect us and will make us whole, like Paul writes in 1 Corinthians 13, “when the perfect comes,”—and it will—“the partial will pass away.”

What we see now is a vague, reminiscent glimmer, a shadow in comparison to the fullness of what now only God can see. “For now we see in a mirror dimly, but then face to face. Now I know in part; then I shall know fully, even as I have been fully known.” Being fully known by God, the only One who can fully see, is to be known as we will be and loved as we are, when love has not yet perfected us. But God’s foundations—faith, hope, and love—they remain. They are the only things that remain, the only things that endure. And they—God—will see us through into completion and whatever follows.